The Ultimate List of What NOT to Feed Chickens: 55 Foods to Avoid

If you want to know exactly what not to feed chickens, here are 55 food items your birds should stay away from.

I wanted the list to be as comprehensive as possible, covering not just what you shouldn’t feed them but why. As in, what it does to the chicken’s body.

I researched for a solid few days using multiple sources for all foods.

Here are the results. Each food item will:

It’s worth noting that chickens will try eating most things. Many items on this list do no harm in tiny amounts. But some will, and it’s prudent to be aware of these.

Some food items have the same toxins and effects. Instead of repeating information, I linked to the related food.

Now let’s begin with A and go through all the way to Z – here’s what not to feed chickens.

Depending on the type of oak tree, acorns contain tannin, a molecule which is toxic in large amounts.

Too much tannin results in chickens eating more whilst losing weight. This can result in diarrhea, constipation, ulcers, kidney failure and death.

The safest acorn with very low tannin amounts is the white oak acorn. Wild chickens often feed on these. They do contain good essential nutrients which keep the gut healthy.

In order from safest to least safe, here are the types of oaks you may want to keep your chickens away from:

Chickens have no alcohol tolerance unlike humans. A few sips could see them easily drunk. The ethanol in alcohol is quickly absorbed by a chicken’s body. They can get bad hangovers!

Apple seeds contain cyanide which prevents cells from using oxygen. In large amounts, this can quickly lead to death. If your chicken has had a tiny amount, they should be fine.

Feeding asparagus to broilers is okay. For egg-laying hens, this can affect the taste of their eggs.

The largest consensus is avocado flesh is safe, but do not feed the pit/stone or skin/peel at all to your chickens. The pits and peel contain persin which can cause myocardial necrosis, or death of the heart tissue.

Dry or uncooked beans are extremely unsafe for chickens. They contain phytohaemagglutinin or hemagglutinin which stops digestion and causes blood clots. Three or four beans is enough to kill a chicken.

The beans are safe after properly treating them. You can do this by soaking and carefully cooking them. But it’s risky if not done correctly.

There are a couple reasons why you shouldn’t feed bread to chickens.

First, bread has low nutritional value. Second and more important, it causes blockages in the chicken’s crop, which leads to bigger problems.

The crop is a small pocket in the right breast where food is stored after being swallowed. Bread tends to ball inside the crop, blocking it up. And since bread contains yeast and sugar, it ferments, increasing the pH of the crop and its contents.

Since the chicken can’t fully empty its crop, it will eat less, causing nutrient deficiency and lethargy. Due to the fermentation of food contents within the crop, a bacterial or yeast infection will occur.

This condition is known as ‘sour crop’, which can be treated but best to avoid in the first place.

Chickens cannot have caffeine because they are so small. Caffeine causes increased heartbeat, kidney damage, hyperactivity and seizures.

Anything junk food is not appropriate for chickens. Candy has high amounts of sugar.

Anything that has been sprayed with chemicals recently such as weeds, the lawn and clippings contain poison.

Like apple seeds, the stone or pit inside a cherry contains cyanide. The flesh of the cherry is fine.

Raw chicken contains salmonella as you likely know, a bacteria that makes humans sick. Chickens are the same. If you want to feed chicken to your chickens, cooked chicken is safe.

Some sources say citrus causes thin egg shells as it limits calcium absorption. This leads to fewer eggs as well as leaching calcium from the chicken’s bones.

Chickens tend to stay away from citrus anyway, so you may find them completely uninterested.

Part of the nightshade family of plants which contain solanine. Solanine kills red blood cells and causes the chicken’s heart to fail.

Do not feed raw eggs to chickens as it causes them to start eating their own eggs. If you must feed eggs, make them unrecognizable by cooking them or scrambling them.

Bracken ferns in particular are poisonous to chickens. They contain a few toxic compounds, the most notable of which is thiaminase. Thiaminase is an enzyme which breaks down thiamin. Thiamin is a B1 vitamin which helps the chicken’s nervous system function correctly.

Birds deficient in vitamin B1 may suffer weakness, lethargy, convulsions and in serious cases, death.

Foxgloves or digitalis are poisonous. They contain digoxin, which is used to make a heart drug for humans. Digoxin can strengthen or slow the heart. In an uncontrolled amount, this can cause the heart to stop.

Contains thiosulphate. The amount of thiosulphate is not as large in garlic as in onions, so a small amount of garlic won’t hurt your chickens. In large amounts it destroys red blood cells leading to anemia and jaundice. Garlic also tends to give your chickens’ eggs a garlicky flavor.

The holly leaf contains saponins, which is dangerous in large amounts. This can lead to vomiting and diarrhea in chickens. Holly contains a small amount and is low in toxicity.

Dairy products contain milk sugars which are hard for chickens to digest. This results in diarrhea. A lot of these products also contain artificial sweeteners which are unhealthy.

The high water content in iceberg lettuce can give chickens diarrhea. Icebergs also have little to no nutritional value.

Orange juice is citrus, which chickens probably won’t drink. Other juices may have a high sugar content which isn’t healthy.

Dry lentils are like dry beans above, with phytohemagglutinin that prevents digestion.

For the most part, maggots are safe for chickens to eat and are a good source of protein.

But, eating certain types of maggots such as fly maggots can cause botulism in your chickens. Fly maggots feed on decaying animal and vegetable matter which contain toxins.

Botulism is also known as limberneck. This is where a chicken lays down with their neck stretched out in front of them. Other symptoms include body weakness and eventually paralysis. These symptoms show up within a few hours. After 24 hours, botulism can result in death.

Dairy contains milk sugars which chickens can’t digest well. They can get stomach aches and diarrhea. A little bit of milk won’t hurt, it just doesn’t do them much good.

Ingesting moldy or rotten food can cause botulism. The toxins in dead or decaying matter can cause weakness, paralysis and death. We covered botulism under Maggots.

They all contain solanine which can cause paralysis, convulsions, diarrhea and respiratory problems.

Each one of these vegetables varies in toxicity. See each for more detailed information:

When cold, it is thick and glutinous. It acts like a sludge and can cause blockages.

Contain thiosulphate. In large quantities this can destroy red blood cells and lead to anemia and jaundice. Onions also affect the flavor of eggs. Garlic has a similar effect. A bit of onion is safe, just not too much.

Cooked pasta is generally fine, although limiting the amount is better. Pasta is high in carbohydrates and low in protein.

You can actually give raw, uncooked pasta to chickens in tiny pieces. But, it’s best to avoid doing this as uncooked pasta has a high amount of starch, which converts into glucose, a sugar.

The chicken converts this to extra fat and egg productivity decreases.

The risk is worse in younger hens who haven’t been outside much. Chickens don’t have teeth, and need to use stones and gravel in the gizzard to break down food. Younger hens that haven’t accumulated enough stones in their gizzards won’t be able to digest raw pasta.

Certain parts of the bell pepper or capsicum are safe, such as the flesh itself. Peppers are part of the nightshade family.

The parts that are highly toxic contain solanine. These include the leaves, stalks, and flowers.

Also avoid sprouted potatoes. Non-green potatoes have some solanine in the skin, so don’t feed raw potato peels or skins either.

White potatoes may not be safe according to some sources.

Raw potatoes and all green potatoes cooked or not contain solanine and chaconine. These kill red blood cells, cause diarrhea and heart failure among other problems.

Rhododendron plants and leaves contain grayanotoxins which are dangerous to chickens if eaten in large amounts. Grayanotoxin poisoning is covered under Azalea.

Dry rice can swell in the chicken’s gut and cause blockages. There is also the risk of rice exploding. Cooked rice is safe. Like cooked pasta, it’s mostly carbohydrate so limit intake.

Seeds and Pits of Fruit

It’s best to avoid seeds and pits in general, although a little may cause no harm. Seeds from fruit like apples, and pits from cherries contain cyanide, while avocado pits contain persin. Plum pits contain amygdalin which breaks down into cyanide.

Soda or soft drink is bad for humans, and the high sugar content is bad for chickens too.

Like coffee, many teas contain caffeine and thus methylxanthine.

Chickens are omnivores and eat all sorts of small animals including frogs and toads. Some species of toad are venomous and secrete poison from their glands.

Part of the nightshade family, tomatoes contain solanine and chaconine.

Cooked tomatoes are safe but do not feed green tomatoes. Like green potatoes, they still contain solanine cooked or uncooked.

Xylitol is an alcohol-based artificial sweetener, and chickens definitely can’t have alcohol.

Whether or not you feed certain items on this list to your chickens, the decision is yours. At the very least, you now know the risks associated with each one.

If you suspect your chickens have ingested any of these foods, monitor for symptoms. Small amounts will either pass or make your chicken temporarily sick. If symptoms get worse, consult your vet.

Want to get into other animals besides chickens? Check out our guide on the best farm animals to raise for your homestead. 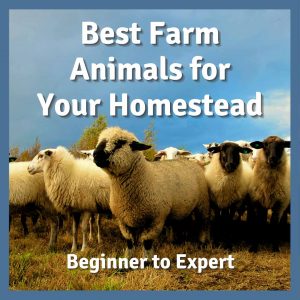 13 Best Farm Animals for Any Homesteader